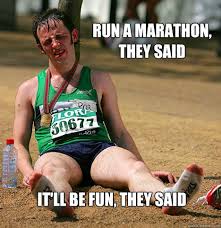 Without even knowing it, this morning I "celebrated" Global Running Day by "registering" for the Erie Marathon.

I haven't run one since I DNFed (did not finish) the Shires of Vermont marathon in 2014. I wrote about my experience mostly as an act of therapy. "I'll grow from my failures!"

Yea, well, sometimes it takes a while to learn a lesson. Last year, I had intended to return to Vermont and finish that damn race (FTDR?). But I didn't want to "just finish." I wanted to crush it. So I piled up the mileage. I also piled up a stress fracture. You would think that a runner with over two decades of experience would have stopped once the pain started.

You'd be wrong. I actually did a 20-miler on that broken foot. Making good decisions.

It's been nearly a year since I returned to running, so I figured that it's time to try marathoning again--even though, as one recent article argues, marathons are a colossal waste of time.


The case against the marathon—and for people to do something better with their time—is so apparent that one really shouldn’t have to give it voice. In a world that’s just and sane, the burden of proof would fall the other way, on all the maniacs who are draining so much effort in this risky, fruitless hobby. Figure that some 550,000 Americans will be running one this year, training up to five or six days per week for five or six months. That means they’ll have devoted something like 100 million hours to this dash away from common sense. Put another way, they’ll have spent 11,000 years, and 150 human lifetimes.

When I first saw the headline, I figured it was tongue-in-cheek. I've seen similar articles before, where a marathoner wonders why anyone pays money to run 26.2 miles. But no. I think he means it. After all, he wants people to join the anti-marathon movement to "train for something—anything!"

Well, this morning I noticed that Eleanor Barkhorn over at Vox decided to respond.


Engber's essay is a clear example of rage trolling, and it rests on a puzzling premise: that marathon running is a uniquely unworthy goal, and that training for one, as compared with any other hobby, is an especially useless endeavor.

He's wrong. I’ve trained for and run in three marathons, and none of them was a waste of time. Marathons have given me structure, friendship, a sense of accomplishment, and, most importantly, pure joy. . . .

It's difficult to comprehend why any of this could be considered a waste of time, and I cannot imagine my life without it. Marathons have helped me stay in shape, given my life structure, and made me feel good at something in seasons where my job or school or relationships weren’t going well. Oh, yeah — and they're fun. That alone is more than enough to make them worth my time.

No surprises, I'm with Team Barkhorn on this one. And I still wonder if Engber's article is meant to be more satirical than sincere. But even so, he's not entirely wrong. An unknowing observer watching a marathon would find the entire spectacle bizarre at best. Go ahead and Google "bleeding nipples marathon." Case closed.

Still, what sport does make sense from an objective view? Every fall, millions of people cheer when young men collide into young men to move a ball three yards and get concussions. GO SPORTS!!!

In the end, I will concede that marathons are stupid--and then I'll run them anyway.
marathons running