Julie Byrne on NPR, Alain de Botton on Marriage, and Kate Blanchard on the Work/Life Balance 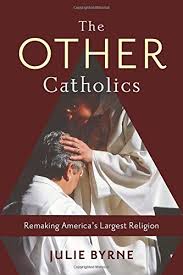 How about some good news? And I'll try not to plagiarize (ZING!).

Give a listen to her recent interview on St. Louis NPR, where she discusses the fascinating world of "independent Catholics." While you are at it, you can read this review from Stanford's Jane Shaw. She summarizes:


Who is a Catholic? The term is usually used as shorthand to mean Roman Catholic, but it is also used by Eastern Catholics, such as Maronite Catholics who are in communion with Rome, and Anglo-Catholics, in the Anglican Church, who are not. It is also used by about 1 million Christians in the US who are independent Catholics, and the subject of Julie Byrne’s fascinating book, based on 10 years of fieldwork and interviews.

“Independent Catholics” is a term that covers myriad groups on both the Left, such as the Imani Temple in Washington DC and the White-Robed Monks of St Benedict, and the Right, including the Society of St Pius, founded by Marcel Lefebvre, and Mel Gibson’s Church of the Holy Family in Malibu, California. Byrne’s focus is on the liberal groups, in part because they are older (the conservative groups tend to be post-Vatican II) and in part because she believes that they are poised to have a greater impact on the future because they embrace the ordination of women, open communion, same-sex marriages and worshippers with multiple religious affiliations.

Next up, "Choosing Wrong" from This American Life. As far as NPR shows go, this one was my gateway. You start with Ira Glass and the next thing you know, Garrison Keillor gets really, really funny. Wait Wait...Don't Tell Me too. So parents, talk to your kids about listening to NPR... before it's too late.

The opening segment is vintage TAL. It features Alain de Botton, who is talking about why marriages fail. Ira Glass asks what advice he would give to marrying couples, which leads to this.

Be incredibly forgiving for the weird behavior that's going to start coming out. You will be very unhappy in lots of ways. Your partner will fail to understand you. If you're understood in maybe, I don't know, 60% of your soul by your partner, that's fantastic. Don't expect that it's going to be 100%. Of course you will be lonely. You will often be in despair. You will sometimes think it's the worst decision in your life. That's fine. That's not a sign your marriage has gone wrong. It's a sign that it's normal, it's on track. And many of the hopes that took you into the marriage will have to die in order for the marriage to continue. That some of the headiness and expectations will have to die.

I want this on a shirt. Something like, "Marriage: Where Headiness and Expectations Come to Die." Brilliance.

Finally, don't miss Kate Blanchard's elegant and insightful meditation on the work/life balance of the professor. She writes...


When it comes to the time-related aspects of achieving work/life balance, I’ve been luckier than basically every working woman—certainly every working mom—I know. My graduate program in Christian ethics was necessarily supportive of its procreating students, so my “good years” were not “eaten up” by grad school. I got a job at a family-friendly college, highly understanding about parental duties (even to the chagrin of some of my child-free colleagues). My family has inherited enough money to enable us to live well in this rural town on my modest salary, such that my introverted spouse has happily been a stay-at-home dad for years. I almost never have to leave work early to pick up my kid from school or take him to the doctor; I can work at admissions events on weekends without needing to find a babysitter; I can stay late to hear visiting lecturers, when and if I am willing to sacrifice the precious bedtime hour I usually spend with my son. Best of all, everyone in my family is healthy (so far), so my time and energy are not consumed with motherly worry. I can, in short, focus on work from September to May with very few interruptions and little guilt. “Summer’s coming!” is our mantra.

I’ve had a much harder time achieving balance with regard to my sense of identity. I went to grad school hoping to become a professor because I believed being a professor would mean something. I would finally feel glamorous or significant or at least useful. But now that my luck has actually brought me to the enviable state of tenure, I still find myself feeling like a nobody. I’m a satisfactory teacher, a mediocre scholar, and all my “service” has been grunt work without any real authority. I have a few exceptional students who make me proud, but I believe they would be equally amazing regardless of their professors. I had put all my eggs in the professor basket in hopes of having an identity I could feel good about, and I somehow the basket was still empty.

This problem is certainly not unique to me. I think lots of folks in higher education have a “vocation” problem (likely exacerbated by an ethicist’s primary concern about how to be a good person) whereby we imagine that our job—unlike most other jobs—is some kind of higher calling that should define who we are. Higher education is an ostensibly mission-driven industry, where our “product” is adults who are, we hope, better people than they would have been without education. It goes against our values to admit that we work for the money, to say nothing of the health insurance. As it turns out, though, my work doesn’t always seem to have deep meaning; most days I feel just like everyone else in the world whose job title does not tell the whole story about who she is.

As I look at this now, I'm seeing a productive comparison between her and the aforementioned interview with Alain de Botton. Marriage and work--two of the most important things that we do in life. Both come burdened with unrealistic expectations, with images of what ought to be that never seem to meet us where we are.

Our choice, then, is to strive for the unrealistic ideal. Or to come to peace with our limitations, and to make our own joy within this space.

Or as Professor Blanchard writes in her conclusion, "Work/life balance means letting go of the hope for a stable identity, giving up the imposition of pre-approved meaning, and instead learning to see and embrace all the messy things that make up a life."

OK, that deserves a GIF