"Ensorcell" Is a Word And Now I Must Use It 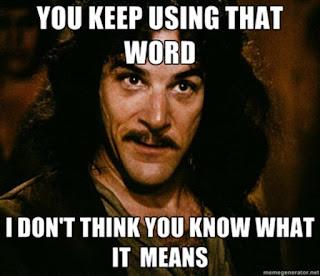 I found out yesterday that "ensorcell" is a word. Dictionary.com tells me that it means "to bewitch."

OK, a lot of people knew.

It came up in an interview that Mike Pesca did with Maureen Dowd. She unearthed the word a while back and thereafter deployed it liberally (see what I did there?) in her columns.

Pesca noticed and started using it on NPR. Other Dowd devotees did the same, such as Aaron Sorkin who nestled it in a characteristically snappy rant in The Newsroom.


ACN won’t be attending the Saturnalia of incestuous ingratiation that does little to instill confidence in the public that the press isn't ensorcelled by the powerful.


So there you have it... the story of how one Harry Potterish word pushed its way into new corners of the American lexicon. I just checked Google News, and I'm seeing evidence of... let's call it... "ensorcell creep."

Here's a line from a review of Woody Allen's new movie, Café Society.


We’re in the gutter — or the popcorn clutter — gazing up at the stars. We ogle like ensorcelled idiots the swoony screen pictures.

To do my part in advancing ensorcell creep, I have determined to use "ensorcell" in a casual conversation, randomly and without warning. Just toss it out there. Don't define it. Just use it.

Oh man, I can totally do this.

Ensorcell on, friends.
big words word of the day