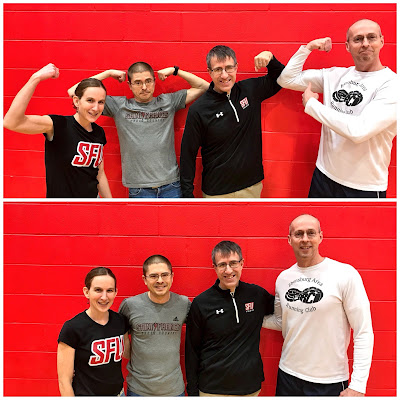 Over the weekend, Kate and I along with some friends did the Think Pink Push-Up Showdown. It was during halftime of a basketball game. We were one of a bunch of teams. Each member of our team did push-ups for a minute all in an effort to raise funds and awareness for cancer research.

So a good cause and a fun event...that I was taking a tiny bit too seriously. But that's a story for another day.

For now, let me explain why I was particularly eager to volunteer for this event--and to volunteer my wife too.

Our story begins in the wild, carefree days of the summer of 2017. On my drive into campus, I started listening to a Runner's World podcast wherein two of the staffers attempted an Air Force physical fitness test--push-ups and sit-ups (each for a minute) and a 1.5 mile run.

I knew that I could ace the running test, but I wasn't sure about the other two. Accordingly, when I arrived at my office, I hit the floor. The results were, to say the least, humbling. How could a former Marine tank an Air Force physical fitness test? The horror.

So I started doing push-ups and sit-ups. It wasn't pretty at first, but I stuck with it. Then in November, I committed to doing 100 push-ups a day. Since then, I have managed to hit 100 in a single set on two occasions.

As I look back, I wonder about the habits that I have developed and the ones that I haven't. Obviously, for most of my adult life, I have made distance running a priority. It's to the point where I don't really think of it as a habit. It's just a part of who I am.

When it comes to all of the other "stuff," though, everything from core and arm strength exercises to foam rolling and eating well have come and gone from my routine. I know that all of this will help to keep me healthy, happy, and fit. But the willingness to fully commit to them escapes me.

Until I started doing push-ups every day. What's the difference? For starters, I do the push-ups before I run. If I wait until after, I will find all sorts of excuses to "do them later." Also, I downloaded an app that tracks my push-ups and will remind (shame?) me if I don't do them.

Put simply, I identified a reasonable short-term goal, found a way to keep myself accountable, and I haven't made excuses. Seems like sound advice for all sorts of things--from push-ups to, oh, I don't know... writing and stuff.