Skip to main content
Showing posts from December, 2018
View all

Course evaluations. I looked at mine on Monday. I've been stewing ever since. Yes, stewing is the right word. The recipe is rather simple. First, you toss in all of the stages of grief, then you add a dash of self-doubt and self-loathing. My numbers were fine(ish). A little lower than in the past. But I did make some changes to the course. So revisit, revise, and try again. I can handle the numbers. But the comments... Actually, it's one comment. One comment that is literally surrounded by positive comments. But one comment, nonetheless. The theme is something to the order of I HATE YOU! It's been a while since I got one of those. And I can rationalize past it. I'm not perfect--not at all. I can accept that some students just won't like me. It happens. But this doesn't stop the "feeling like a fraud" stew.  Instead, all of my worse insecurities have come to the surface. Specifically, there is my persistent fear of becoming irrelevant, o

For as dysfunctional as my relationship is with social media, a good bit of this syllabus is the result of Twitter interactions. A good reminder of the "all things in moderation" motto. Updates on the course forthcoming... day 1 starts today! 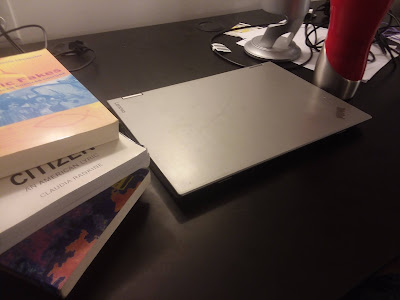 After Two Years, I Have a Draft! Now What???

A couple of Sunday mornings ago, I closed my laptop and felt pretty good about myself.  I had a draft.  A completed draft.  Don't get me wrong, it's a flaming pile of mess. But it's my flaming pile of mess.  It was two years ago when I started an exercise in self-discipline wherein I committed to writing a minimum of 30 minutes a day for 30 days .  It was a success, insofar as I was able to stick to this commitment.  But it also succeeded in helping me to develop a new habit. In the coming months, I continued writing for at least 30 minutes on most days. Have there been lapses? Yep. Plenty of them. But with a little bit of effort, I've been able to recommit.   Ever since closing my laptop on that day, though, I've let the metaphorical dust gather around the manuscript. Most days, I wake up thinking that this will be the day where I turn it around. But then the day finishes, and I'm telling myself "Tomorrow you'll do it. Just wait until tomorrow." B