Looming Deadlines and the Guilt Ghost

My teaching piece is nearing completion. I tell myself this so that I feel like I'll be done soon. In all reality, though, hours and hours of revising await. But maybe it won't be as bad this time, he tells himself...

Ideally, I would carve out a little time to work on the book. But I just can't do it. When I'm writing one thing, I have a hard time conjuring the will to refocus on something else. Plus, I am always haunted by the hovering specter of the deadline. Like, when I know that my time is running out, the Guilt Ghost follows me everywhere. He (he's a dude--I know he's a dude) tells me that I'll have to skip my morning run; he chides me for watching House of Cards; he even disapproves of me taking my kids to the playground. 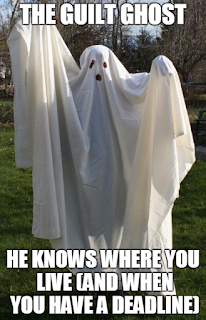 My only  proton pack (Ghostbusters reference) is hitting send, of finally saying "good enough." I think that I have gotten better at that over the years. I know that early on, I would hang on to whatever I was writing for FAR too long. At the same time, there is a fine line between sending something that is "good enough" and sending something that is pure garbage. I had this problem when I was writing an essay for my friend Mike Pasquier.

The essay is about the civil religious meanings of the headwaters of the Mississippi River--Lake Itasca in Minnesota. In the early nineteenth century, three different explorers had made three different claims as to the location of the headwaters. Each appealed to their emotions to certify their findings--in other words, a feeling of wonder told them that they were at the right place. Additionally, they made deliberate gestures to inscribe this place into the American landscape, to make it a sacred place.

I had a devil of a time writing this essay, in part because one of the explorers was Italian. So I had to reorient how I thought about civil religion, and how someone with European frames of references could influence an American story. But ultimately, I just couldn't make the essay flow--you know, like a river. Get it?

The essay just needed time. I had to sit with it, tinker, reorganize, rewrite. Finally, Mike sent an email saying something to the order of "HEY JERK, WE'RE WAITING ON YOU!"

So I finally hit send.

Is it a perfect essay? No. Do I think that I made some valid points? Yes, yes I do.