More on Student-Led Discussions and My Inability to Dunk

Since mentioning that I had a moderate degree of success doing this last semester, I have heard from some friends who said that this approach had resulted in their own dumpster fires. OK, here's the thing... I get it. In my class, there were tangents, superficial comments, and words that just occupied space.

This particular class was my favorite of anything that I have taught. Like, ever. In fifteen years.

Because it was lively. Because it was fun. Because I heard REALLY smart things percolate up and redeem every, single banal remark. Because I liked my students. Because I still hear back from them about how much they enjoyed the class.

I could go on. But I suppose that I should give some background. Because this particular course isn't like most of the courses that I teach.

For starters, it was offered through our General Education department. We recently revised the curriculum and added a "capstone" course to be taken during the final year. Instructors have control over the topics and readings. But we are asked to maximize interaction and minimize lectures. 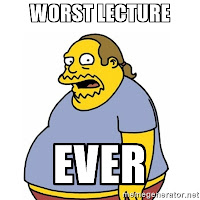 I took on this course knowing two things: 1) I stink at leading discussions. I just do. I have tried and tried and tried. But it's like dunking a basketball--no amount of plyometrics is going to get me there. I have limitations. And dunking and leading discussions are two of them (the other is MMA). And 2) the last time I tried something like this I HATED it. I mean, violently hated it. It was so bad that I went on a lecture binge for three years. "Oh, you want to discuss this material. Do it after class--I'm talking now. Bask in my intellectual awesomeness."

Here I was, then, ready to dive back in to a setting where I knew I had limitations and a rough history. So I selected a topic that I thought would be of interest to most students, which led to the course title: "Radiation, Robots, and Viruses: The Apocalypse in American Film and Literature."

The novels selected were:

The films selected were:

The course met twice a week, and had days for watching films and preparing for essays. This left 15 class sessions for discussions. Now, most of the students taking this course (started with 20, ended with 15--so we had our own little apocalypse) had majors in business or health studies. Only two were from the humanities.

Additionally, they were seniors, many in their final semester. So going into this class, I just wanted them to enjoy the genre and have lively conversations. Of course, no one wants the talk to just be talk. Hence, groups leading the discussions were graded as follows:

Participants were also graded, although at the end of the semester. I gave two updates through the semester on what their projected grade was. If I had it to do over again, I think that I would grade this weekly too. Anyway, here were my standards:
I kept track of all of this while the discussion is happening. This system worked well enough. Also, throughout the semester, I would work at nudging conversations in one direction or another. In other words, I "coached up" my students on how to lead a conversation and on how to participate in one. Saying something in a group requires a degree of courage--you have to believe that you have something worth saying. Once we get to a place where that hesitation is minimized, we can work on making sure that our comments have substance.

I have more to say on this, but I am currently over my :30 minute limit. So I'll close with a comparison. A few years ago, my wife and I started a Couch-to-5k program in Ebensburg. It was fantastically rewarding. We had anywhere from 40-60 people coming out, most of whom were not runners. Within eight weeks many of them went on to finish a 5k.

Since their "graduation," some of our C25K participants have continued running. But most stop. While I would like everyone to continue running, I know that it's not realistic. What I do know is that every one of them had a transformative experience--they started something unsure that they could do it. But after some time and effort, they proved something to themselves.

Something similar happened with my apocalypse class. I think that my frustration with the limitations of discussions stems from my own unrealistic expectations. I want classroom discussions to be exactly the same as the discussions that I have with my colleagues. That's not going to happen, just like my C25K runners weren't going to set course records on their first time out. But they grew in their own way. And I left every class meeting with a smile, and the assurance that Professor LecturesAlot won't be making his angry return.
teaching this took longer than 30 minutes