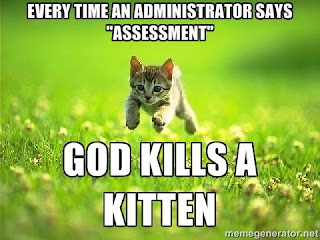 I think that Monday is my first official day of sabbatical. University *stuff* (read: ASSESSMENT!!!) remains an obligation until tomorrow. Speaking of tomorrow, I will be leading a "field trip" to Penn State University Press, where we will be talking to Patrick Alexander about publishing. More on that next week.

I'm not sure that everyone I talk with really gets what I'm doing on my sabbatical. Scratch that. They get the big picture--an extended summer break. They just aren't clear on I am doing with this surplus of time. It seems that "writing a book" just doesn't adequately answer the question. Moreover, when I say "I'm writing a history of religion and sports in America" I can almost hear them thinking, "Oh great, another academic who takes something fun and interesting and sucks all of the life out of it."

Indeed. I wish I could argue back, but...

Just so everyone is clear here, the 3 AM panic attacks are already starting. "Sabbatical," in my mind, is horrifying because it means that I have to produce results. I'm already having nightmares where my sabbatical is about to end, and an army of judgmental deans and provosts are disapprovingly scowling at my three paragraphs of progress. "But look at that endnote!" I scream. "It's got, like, FIVE poststructuralists in there. I even say 'hegemony'!" The scowling continues.

But still, I haven't had much luck communicating that I have untold hours of writing and research ahead of me, and that a sabbatical is the only way that I will Get the Damn Book Done (GTDBD©).

So I've quit trying. From now on, whenever I am asked "What are you doing on your sabbatical," I will reply with....