on September 23, 2016
Time spent on book: 5 hours
What I did: Metaphors. Thanks Brent Plate. I might be dedicating this book to you.
Grade for the day: B 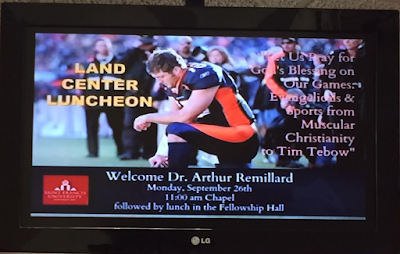 Texas. I hear they play football there. At least that's what Buzz Bissinger taught me.

Until this year, I have never been to Texas. But I will be traveling there in November to the American Academy of Religion meeting. And this Sunday, I will be flying to Houston to visit my friend John Wilsey and to give a talk entitled, "'Let Us Pray for God's Blessing on Our Game': Evangelicals and Sports from Muscular Christianity to Tim Tebow."

Given my audience (Baptist seminarians), I decided to follow a trajectory outlined by Bill Baker in his book, Playing with God. As I have explained here before, Baker sees the "muscular Christian" movement as having led to the production of a unique theology of sports. Mind, body, spirit stuff. By the mid-twentieth century, however, he notes a shift wherein playing fields became less about building character and more about advertising. "Sportianity," as Frank Deford called it.

Baker seems to think that this is a real problem, especially in our current era where a new sports scandal emerges almost daily.


Sports has lost the moral compass that for more than a century taught Americans to honor boundaries, play by the rules, and work together for a common good.

But there are still some glimmers of hope out there, some models of what he calls "moral athleticism." As an example, Baker cites the story of Linda Head Flanagan, a high school track coach in New Jersey. In a personal essay in Newsweek the coach detailed the challenges and rewards of doing what she does. "The purpose of high school sports," she explained, "is to develop discipline and courage—a reservoir of strength to draw on throughout life."

For Baker, this was exactly what the "muscular Christians" had in mind. So in drawing the comparison, he leaves us with one place where sports aren't going off the rails.

All of this has me thinking... Is there someone like this out there in the land of college football? As one recent Washington Post column succinctly put it, "What’s wrong with college football? Everything." Indeed.

But maybe not. Have you ever heard of John Gagliardi? Probably not. He's not exactly a household name in the world of college sports. But he should be.

From 1953 to 2012, Gagliardi was the head football coach at Saint John's University in Collegeville, Minnesota. At this Division III program, Gagliardi collected four national titles and became the winningest coach in college football.  That's not a typo. Amos Alonzo Stagg, Bear Bryant, Joe Paterno, Bobby Bowden. Gagliardi has more wins than any of them.

More impressive than the wins, though, is the way that he has won. "Winning with No's" is what he calls it. No tacking in practice, no yelling at players, no whistles, no mandatory lifting. In fact, there are no rules--except for one. The Golden Rule.

His methods are completely counter-intuitive in the world of football. Like, completely. I mean, check out this video of Florida's Jim McElwain.

But the results speak for themselves. Which leads me to wonder: Would a Gagliardiesque coach be effective at the "big time" level? Could someone "Win with No's" at Alabama, USC, North Carolina, or Penn State? I don't know. I'm no expert in college football. But also, no one has tried it. Too risky, I suppose.

Still, as a self-loathing college football fan myself, I sure would feel a tiny bit better about my viewing habits on Saturday if someone like him were on the sidelines.
Bill Baker football John Gagliardi John Wilsey muscular Christianity