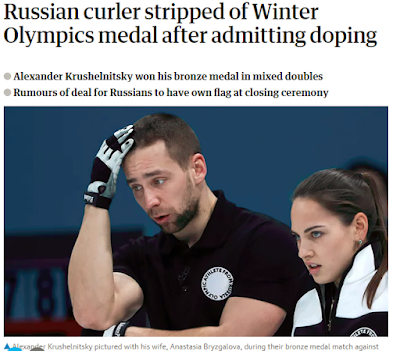 So this happened... And in case you were wondering, this is #NotTheOnion. But it certainly feels that way. One report explains...

The Russian curler Alexander Krushelnitsky has been stripped of his mixed doubles bronze medal amid rumours that a deal has been struck to allow Russian athletes to march under their country’s flag at Sunday’s closing ceremony.

Krushelnitsky had initially protested his innocence after testing positive for the banned heart drug meldonium, claiming his drink had been spiked. However on Thursday he dropped his appeal before he was officially banned by the court of arbitration for sport.

The PED of choice for the curler was meldonium, which, perhaps not surprisingly, was originally developed for the Soviet military.


Meldonium was originally developed for Soviet troops operating in the mountains of Afghanistan in the 1980s. In the span of time since, the drug and its inventor have been praised for producing social and economic benefits: In addition to preventing and treating heart disease, meldonium has generated upwards of €70 million per year in revenue and accounts for about 0.7% of all Latvian exports. Grindeks, the manufacturer of meldonium, insists that it is “a therapeutic drug” and “not a doping agent.”

In 2016, the World Anti-Doping Agency added meldonium to its banned substance list, following discovery of its use by athletes for the purposes of increasing oxygen-carrying capacity and boosting endurance. Soon after, Russian tennis star Maria Sharapova tested positive for using the drug and was subsequently banned from the sport. In the immediate aftermath, there was a reported spike in sales of the drug in Russia and Latvia, where the inexpensive pill can be purchased over the counter.

Actually... just like any sport, the folks on TV make it look easier than it is. As one of the competitors put it...


The Olympic competition was quite different to other events because we had so little time to recover, and it’s quite hard for a male sweeper in mixed doubles. You have to follow and sweep every rock, and your muscles actually get quite sore and torn with all the work during that tight playing schedule. . . . I know in my case I would have liked to be more fresh in some of those games and have more energy, at least mentally. It especially could have benefited the Russians as they had a really late game when they lost their semi-final, and then they were playing early the next morning against us in the bronze match.

Succeeding at the elite level of any sport means finding any and every advantage that the athlete can. Practice, diet, lifting, sleep, meditation.... All activities deemed acceptable and legal by the authorities in charge of sports. But the category of the PED signals danger and disorder. The user, in turn, earns the label of  "dirty athlete."

It's no trivial matter that we use the metaphor of "dirt" to designate foul play in sports. "Dirt offends against order," wrote the anthropologist Mary Douglas in Purity and Danger. "Eliminating it is not a negative movement, but a positive effort to organize the environment."

The Russian doping scandal has put into motion something that looks like an effort to "organize the environment" of international sports. And the example of the doping curler will no doubt become an ironic and curious coda to this ongoing story.

But it's hard for me to see PED use suddenly coming to an end. The stakes are high in elite sports. And the competition is separated by razor-thin margins. Moral pronouncements about keeping sports "clean" might sound nice. But the reality is that the need to find an edge--even in curling--will will compel athletes to accept the risk.
doping Olympics PEDs Russia