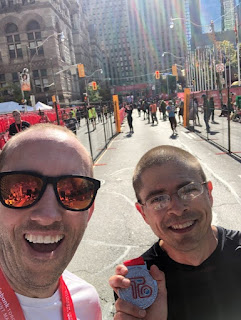 Somewhere at around 22 miles at this year’s Toronto Waterfront Marathon, I joked with my friend Andrew that the race ought to have a 1-kidney division.

He chuckled and, perhaps temporarily, forgot the muscle spasms rippling through his legs.

Then it was back to walking, stretching, and shuffling.

“We’ll get there,” I assured, as the crowds of runners passed us by.

Truth be told, I was beyond impressed to see Andrew running in this moment. It was a little less than a year ago that he donated a kidney to his son, who had struggled with health issues ever since birth.

Soon after Andrew recovered from his surgery, he set his sights on running a marathon as a way of celebrating the health and wellbeing of his son. He also asked me to run with him, and I immediately said yes—even though I had considered myself a retired marathoner.

After Andrew and I ran together in college, I was determined to conquer the marathon distance. In my formative running years, I was the person who got stronger as the runs went longer. Interval work was fine, but give me the Sunday long run every day of the week.

Then as I started actually running marathons, and the implosions came in epic fashion.

I would switch training programs and experiment with a range of hydration and nutrition plans, all to the same outcome. And then there were the injuries. The many, many injuries that struck before, during, and after these fantastically terrible races.

Finally, after hobbling across my fifteenth finish line, I gazed into the mirror and had a hard talk with myself.

You are not a marathoner.

You will never be a marathoner.

And I did—until I received Andrew’s request. This time around, though, the old burdens of training didn’t seem so burdensome. Sure, there was the requisite soreness from a bump in volume and intensity. But it never tore me down or broke me.

Even by race day, no amount of fatigue could overcome our soaring spirits as we crossed the finish line together. My elation was certainly justified, since I ran a personal best—a term that I have since come to redefine in the wake of this experience.

The time on my watch only told one story. It’s the story that I have been telling myself about running for years now, one with metrics like time, pace, and place.

But this particular personal best could not be captured by any GPS watch. This one was about those intangible yet vital things like friendship, family, and health.

In my roughly three decades of immersing myself in distance running, I have come to know what this sport can do for me. But in running alongside my friend for 26.2 miles, I received an object lesson in what running can do for others.

Indeed, the marathon became a stage for coming together and celebrating the gifts that life has to offer. This, truly, is running at its best.
friendship marathons running