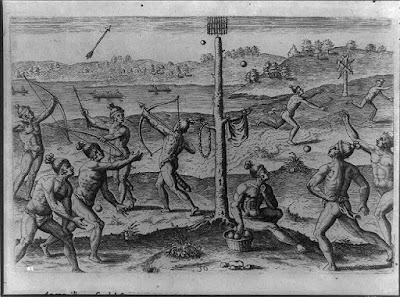 A writing update! Seriously! It's been a while. So here we go...

I spent a good deal of time today reading. Reading about an image. Hoping that it might tell me something about religion and sports in colonial America. I'm not sure where it will take me. But it has been hella interesting (I looked up "hella" on UrbanDictionary--I think I'm using it right).

The image (copied above) is one of the many, many infamous engravings of Theodore De Bry. You've seen them, I'm sure. They decorate every textbook that deals in any way with the colonial era. Most of the time, they just take up space. But I was hoping to scratch the surface a bit, to learn something about the producer, the time, and the possible meanings.

Most of us who know anything about these images tend to think that they are part of the ideological battles between Catholics and Protestants in Europe. De Bry was a Calvinist to the core who was kicked around Europe before settling in a hospitable Frankfurt. So it makes sense that he was taking shots at Spanish Catholics, accentuating their abuses in the Americas.

De Bry was also a businessman, which brings me to Michiel Van Groesen's The Representations of the Overseas World in the De Bry Collection of Voyages (1590-1634). Thorough doesn't even begin to adequately characterize this book. Among his more compelling discoveries is how the De Bry firm tailored their message to their audience. So in their Latin editions, which targeted Catholics, the anti-Catholic stuff was pushed to the background. They saved all of that for the German translations.

Profit, then, motivated strategic decisions in editing and distribution. Additionally, Van Groesen emphasizes that De Bry's images epitomize the emergence of a European identity, one developed in contrast to the perceived "uncivilized" and "un-Christian" lands of Asia, Africa, and the Americas.

How will all of this fit into my account of religion and sports? It's hard to say. Today, I put together 802 words. I suspect that I'll be fortunate if 100 of these words survive.

I'm at peace with this fact of writing life, that the majority of what we do never sees the printed page. But it still hurts.
book update colonial era writing