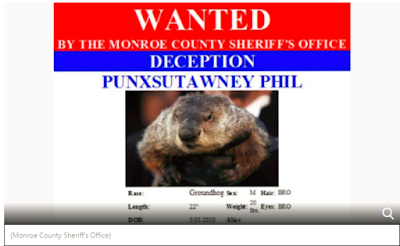 More than seven weeks ago, Punxsutawney Phil emerged from the ground and predicted six more weeks of winter. Many celebrated, while others grumbled about the thought of another month and a half of cold temperatures.

That six-week period has passed, and it's still cold. In eastern Pennsylvania, authorities in Monroe County are tired of waiting for spring's arrival, so they've issued a warrant for the groundhog's arrest on charges of what they called deception.

"No, the groundhog's annual forecast really has no basis in science or meteorology, but I can certainly commiserate with those that are getting frustrated at the persistence of the cold as we launch into spring," said weather.com senior meteorologist Jonathan Erdman.

The Monroe County Sheriff's Office is doing everything it can to haul in the rodent. They posted a wanted poster on Facebook, which was also placed on their Warrant Wall at the police station.