On the Road to Indy and Three Podcast Recommendations

An early morning chunk of writing so that I could drive to Indianapolis to the NCAA for a Faculty Athletics Representative (FAR) "Institute." This past January, I was appointed as Saint Francis's FAR, which basically means that I am a liaison/buffer between athletics and academics. Because this position is mandated by the NCAA, there is all kinds of *stuff* that I need to know. Hence the trip to Indy.

Since I drove, I had the opportunity to burn through some podcasts. Here are my top three from the trip, in no particular order. 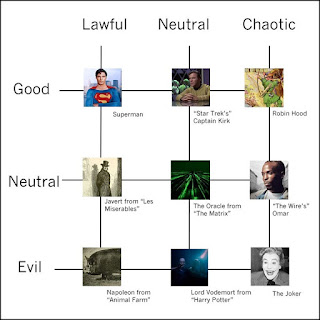 Studio360, "Frank Langella, Rebecca Miller, & Character Alignment."
The last story really caught my attention. It deals with a character chart that is part of the Dungeons and Dragons world, which can also be applied to popular culture and literature. By the end of the segment, I was surprised (and delighted) to hear my friend Michael LaBossiere featured. Give it a listen. Meanwhile, one of these days, I will fill in this chart using college football coaches. "Chaotic Evil" has to be Jim Harbaugh. I mean, that's easy. But I really have to think about the rest.

WTF,  Interview with Sturgill Simpson
I have been a fan since first hearing Metamodern Sounds In Country Music. This interview just made me a bigger fan. It helps that Simpson and I are of a similar age, and had similar tastes in music growing up. At one point, he talks about how Gun n' Roses upended his music world, and quickly became a welcome island in an ocean of craptastic hair metal. He also talks some about being in the Navy, and how that has continued to shape him all these years later. Overall, I found Simpson to be genuine, humble, interesting, and insightful. All of this comes through in his music. But it was good to hear it confirmed in this conversation.

On Being, Michelle Alexander—Who We Want to Become: Beyond the New Jim Crow
The New Jim Crow: Mass Incarceration in the Age of Colorblindness needs to be required reading for, like, everyone. In this interview, there is no shortage of discussion on race and incarceration, and all of the depressing realities that accompany this tragic story. But after all of that, Alexander concludes on a note of optimism:


I’ve been thinking a lot lately about this notion of “revolutionary love” and what that means. And it’s something that I spoke with Vincent Harding quite a bit about. And I think for me what it means to be fully human is to open ourselves to fully loving one another in an unsentimental way. I’m not talking about the romantic love, or the idealized version of love, but that the simple act of caring for one another, and being aware of our connectedness as human beings, and also the reality of our suffering, and the reality that we make a lot of mistakes, and we struggle and we fail.

That’s all part of being human. We suffer, we love, we struggle, we fail, and then we love again. And I think trying not to imagine that we’re anything more or less than that, as human beings struggling to love and find our way, making mistakes, but still yearning for a deeper connection and a sense of purpose in our lives is what being human is all about. Now of course, so many people, not just in the United States, but around the world, are struggling on a daily basis just to survive.

But even among those folks, what I have found is that there’s love to be found. There’s joy there. There’s suffering. There’s redemption. All of it. And that’s what it means to be human. And if we are going to evolve spiritually, morally, as human beings, we’re going to lean in to caring more, and loving more for one another, and honoring our connectedness, and our oneness, and resist that impulse, that fear-driven impulse to divide and label and react with punitiveness rather than care and concern.

So plenty of good listening if you haven't tuned in already.

For me, it's FAR-madness for the next couple of days. So not much time for blogging or writing. Sigh. On the bright side, I wonder if I'll see Mark Emmert? Maybe he'll want to take a selfie with me?

Ah yes, I think I have my goal for the week!
podcasts travel writing