Taking Your Class for a Walk

When I was designing a banner for my undergrad conference, I rather instinctively set The School of Athens as the background. The conference was conceived as a "celebration" of the liberal arts (damn it). So I wanted an image that captured our vision. 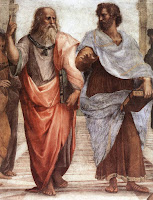 Recently, I have been calling to mind this infamous fresco for another reason. Namely, in the center, we see an aged Plato walking alongside the youthful Aristotle. They are, no doubt, discussing Very Important Things. But what draws my attention now is not so much what they are saying, but what they are doing. Walking.

Indeed, over at Inside Higher Ed, Del Doughty explains how a spontaneous decision to have a walk-and-talk with one student led him to consider trying it with a class. After contemplating the presence of walking in the teachings everyone from Plato and Jesus to Thoreau and Gandhi, the author  gave it a whirl in his seminar on Cervantes.

He explains his process, and the results:


I told the 13 students ahead of time that we would be conducting our class on foot and would meet at our usual time in our usual classroom and depart from there. The next class session, they showed up with their books, notebooks and appropriate footwear. “Before we get going,” I told them, “take a few minutes to review the texts under discussion today, and after you have gone over them and checked your notes, rank them in your mind from most to least helpful in understanding the Quixote.” We took 15 minutes to silently look over the reading. Then we stood up, grabbed our books and happily set off.  It was clear and sunny morning -- a little on the cool side but nothing more than sweater weather. We walked out the front door of our building and took a long, curving sidewalk that led to the oldest and most iconic building on our campus. We formed a pretty tight pack, with me more or less in the middle, and moved along at a very casual pace.

I pitched the question: which of the five pieces of literary criticism that we read for the day was the most helpful in illuminating the novel?” Someone offered an answer and a brief rationale.  Someone else agreed, and a third student said that she could understand why someone would like that article, but she was a little unclear on the direction of the critic’s overall project.  The first student tried to clarify, and someone else chimed in to support the dissenter.

In short, we had a normal class discussion going. As we approached the library, two or three students were flipping through their books to read a passage aloud in support of their claim. Walking and reading at the same time is second nature to students who were raised with phones in their hands. The discussion was going at a crisp pace.  We rounded the edge of the lake and passed the president’s house.  By then we had covered three of the five articles, and almost everyone was chiming in.

In the end, we came around to some benches by the fountain and decided, as a group, to camp out there and wrap things up. No one made an actual decision; it just happened. By then any sense of weirdness or experimentalism had worn off, and we were just a bunch of people talking about literature beneath the trees. That’s sort of what I had imagined I was signing up for when I decided to become a college professor many years ago.

Can walking with students improve engagement? Can it even increase persistence, retention and completion? To find out, I would need to set up a study, do a lot more walking and analyze the data. That’s a ways off.

In the meantime, I know that students like it. They are pleased by the attention they receive, and they find the change of pace -- pun intended -- a refreshing break from the usual. That can’t be bad. I wouldn’t mind seeing more people adapt this old-school approach and take to the campus sidewalks with their students.


I'm not sure that I will be doing this any time soon. But I appreciate the effort to rethink the classroom, to disrupt our settled understandings of where and how learning can happen. So I'll file this away as a "maybe." After all, if it's good enough for Plato...
teaching