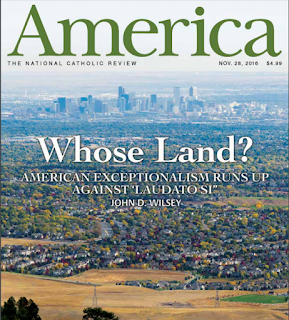 For the past few summers, I have attended the annual meeting of the Society for Values in Higher Education. I have also made it a habit of bringing people with me--people like John Wilsey.

At this year's meeting, I recruited John to participate in a panel that I organized called
"Is Civility Possible in the Climate Change 'Debate'?: An Interfaith and Interdisciplinary Panel on Pope Francis and Laudato Si’."

The idea for this came from something I wrote (that's some sly self-promotion right there) about the encyclical when it first came out. I had observed that if we were ranking the most environmentally friendly presidents of the twentieth century, Richard Nixon would be in our top three. That's right, Richard Milhous Nixon. He called cleaning up the environment "an urgent common goal of all Americans," and went on to ink 14 laws related to environmental protection.

Most of that consensus, though, unraveled by the 1980s, as environmentalism became folded into an emerging culture war. The battle lines were clear. Either you favored jobs or the environment. Pick your side. And dig in.

In Laudato Si', I see Pope Francis trying to look past such stark binaries. He asks that we read this document in light of Pope John XXIII's Pacem in Terris, which, published in the wake of the Cuban Missile Crisis, drew sharp focus on the perils of nuclear weapons and the assortment of injustices stemming from an unchecked martial mindset.

By most accounts, Pacem in Terris found a receptive audience in the United States, as Catholics and non-Catholics from across the political spectrum took to heart the pontiff's moral challenge to pursue peace and justice.

Could Laudato Si' do the same? It's hard to say. That's why I wanted people like John commenting on the matter. And comment he did. John tied together his work on "American exceptionalism" with Pope Francis's prophetic call to protect "our common home."

After our panel concluded, I had suggested to John that he submit his paper to someplace like America Magazine. Do you know what John did? He submitted it to America Magazine. Better yet, it became their cover piece for the November issue.

All of this is to say, I take complete and total credit for this article. But John did a pretty good job too. Here is a portion...


Since the Colonial period, Americans have seen themselves as an exceptional people, a view that has taken two forms: manifest destiny and example. Manifest destiny is the belief that God has chosen Americans as his special people and has ordained that they control the North American continent. Adams’s views on Oregon are consistent with manifest destiny, as was President James K. Polk’s motivation to go to war against Mexico. (Ironically, that war forced the United States to compromise and divide the Oregon Territory with the British.) But John Winthrop, the first governor of the Massachusetts Bay Colony, articulated the exemplarist form of exceptionalism when he referred to the colony as a “city upon a hill” in 1630. In this view, America must serve as an example to the world, of faithfulness to high ideals. Abraham Lincoln fits within this exemplarist framework. He consistently pointed, in his many critiques of the institution of slavery, to the necessity of being true to the equality clause of the Declaration of Independence.

I have called these two articulations of American identity “closed” and “open.” Closed exceptionalism hijacks Christian doctrines and imagery to cast Americans as divinely chosen, morally innocent and entrusted by God with a land to act upon and dispose of however suits them. But open exceptionalism is a political and social expression of true American identity. It does not rely on contrived religiosity to advance a unifying vision for how Americans see themselves in relation to the world, or how to interact with the bountiful and beautiful land that they occupy.

Pope Francis’ “Laudato Si’” presents a challenge to closed American exceptionalism. The encyclical offers a potent critique of the “drill, baby, drill” mindset of Americans who believe that if a natural resource is available, we are obliged to exploit it, whatever the cost. It also critiques the “throwaway culture” of which we are all a part, and explains how that culture is contributing to the general destruction of the good gift of creation given to us by a loving God. Pope Francis stresses that the Christian understanding of the dominion mandate is that God gave humans responsibility over creation not for purely utilitarian purposes, but to be stewards of it as a good in itself. After all, God called the world he made “good” six times in the creation story.

Make sure to read the rest. And while you're at it, buy his book. As Some Guy said of it,

Distinguished by rich historical details and astute theoretical insights, John Wilsey liberates academic discussions of American exceptionalism and civil religion from their ivory-tower confines and presents them anew to a broad audience. Positioning himself as both an unapologetic American citizen and Christian, Wilsey skillfully describes, defines and critiques these interlocking categories. This book will be of great interest not only to scholars, but also to all people of good will who cherish American diversity alongside the worthy pursuit of establishing a broad and inclusive consensus.

Finally, if you too want to meet John Wilsey, come to this summer's meeting of the SVHE. He will be there as the program director. The meeting is always a rich experience and this year will be no different. It is both a terrific place to share your work and to encounter new ideas that can enhance your own scholarship and teaching. So no excuses... I'll see you in Boston!
America Magazine American exceptionalism John Wilsey Society for Values in Higher Education